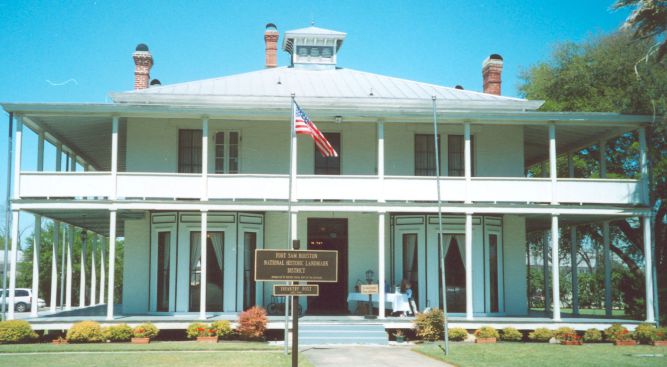 About PFSH and Stilwell House

Construction of quarters for the commanding officer of the garrison of Fort Sam Houston was performed in accordance with a contract signed with J. G. Marshall of San Antonio in 1888.  The cost of construction was $11,476.98.  Sited st the northwest corner of the Upper Post (now referred to as the Infantry Post) these quarters overlooked the spacious post parade ground.  The building is built from brick and is topped with a standing-seam metal hipped roof which has a center venting cupola.

These quarters were built to a two-story, central hall plan with the kitchen in the rear.  Downstairs were two parlors flanking the entry hallway, a library and a dining room connected to the kitchen.  Connecting each of the parlors to the adjacent rooms were richly ornate pocket doors.  The second story included four bedrooms, a dressing room (between the two front bedrooms) and a servant’s room in the rear.  There was also a bathroom upstairs in the rear with a sink and a tub.

The interior was not laid out in accordance with the original drawings.  The stairs shown on the drawings begin on the ground floor just outside the entrance to the dining room, and turn just as they reach the second floor.  As built, however, the stairs begin at the doorway leading to the back porch, then turn immediately before continuing up to the second story.  No reason for this change has been discovered.

Among the residents of these quarters was Brigadier General Joseph W. Stilwell.  Known as "Vinegar Joe," he lived here in 1939-40 while commanding the 3rd Brigade of the Second Division.  He would later command American forces in the China-Burma-India Theatre during World War II.

By 1940, the building had undergone several modifications.  The parlor to the left of the front entry had been redesignated as the reception room and the parlor on the right had become the living room.  Upstairs there were six bedrooms--the original four plus two additional bedrooms formed by dividing the servant’s room.  A toilet was added to the bathroom above the kitchen.  A new bathroom with tub, sink and toilet was installed in the dressing room between the two front bedrooms.  The back window in the left rear bedroom was converted into a doorway and an enclosure was built out onto the porch for a full bathroom--tub, toilet and sink--which was entered through the former window opening.  A storage room was built on the rear porch with an access door through the wall at the top of the stairs.  The building was in this configuration when Brigadier General Stilwell was living there and it remained in use as quarters until 1967.  Lieutenant Colonel Houston S. Roby, the Fort Sam Houston Provost Marshal was the last resident.

The Fort Sam Houston Museum moved into the building in 1968.  The interior of the building was arranged so that visitors entered through the kitchen, which was set up as a reception area.  Most of the museum’s exhibits were set up on the ground floor.  The dining room was set up as the Fort Sam Houston Room with exhibits about the history of the post. The adjacent parlor held exhibits about the 2nd Infantry Division which had garrisoned the post from 1919 to 1942.  Across the hall was the Cavalry Room.  The library held the Bataan Room, focusing on General Jonathan M. Wainwright and the defenders of the Philippines during World War II.

The building was used by the Funeral Escort Detachment of the Garrison Honors Platoon to practice the rendering of honors.  After the departure of the Honors Detachment, the Military Police occasionally used the building to practice their Special Weapons and Tactics and hostage rescue techniques but otherwise, it was unused.

Two possible uses for the Stilwell House were considered but rejected as costing too much.  One was to convert the house into several small apartments for families of children being treated at the main hospital.  The other was to install the offices of the Fort Sam Houston School District in the house.  In each case, the prospective tenant was unable to fund the cost of rehabilitation.  Meanwhile, the unoccupied building deteriorated.  Broken windows allowed the ingress of water which damaged the floors and ceilings.  Paint and plaster were shed by the walls.

The Society for the Preservation of Historic Fort Sam Houston, organized in 1984 to advocate and support historic preservation, moved into the building to conduct its monthly meetings.  It requested and, after much wrangling with the Staff Judge Advocate, received an outgrant of the building and grounds.  Under the provisions of the outgrant, the Society would renovate the building in accordance with Army Regulations and the Department of the Interior standards.  When the renovation was completed, the building was to be made available as a community use facility for official and social activities.

The Society’s strategy for the project was to renovate one room as a demonstration project, then use that room as an example of the final condition of the building.  Sponsors would be sought for each of the remaining rooms.   A grant was obtained from the San Antonio Conservation Society to renovate the left front parlor and the project was on its way.  The Ince family of San Antonio sponsored the installation of the heating, ventilation and air conditioning system and the installation of a refrigerator.  The National Park Service performed sampling and testing of the interior to determine the appropriate colors and finishes.  The installation put a new standing seam metal roof on the building and did most of the lead and asbestos abatement.  Power and running water services were restored.  A bathroom which complied with the standards of the Americans with Disabilities Act was installed in what had been the china cabinet in the rear hall.  This was necessary to make the building usable for activities.  It was virtually impossible to make one of the existing upstairs bathrooms accessible and still comply with historic preservation standards.  In 1993, the National Park Service sent a few preservation technicians to the Stilwell House for some hands on training, using a real historic structure.  All these efforts gradually bore fruit.

On 19 November 1993, a ceremony was conducted at the Stilwell House to unveil a Department of the Interior National Historic Landmark marker for the Infantry Post.  This marker was placed at the head of the sidewalk leading to the front door of the Stilwell House.   Also at the ceremony, the Society had a grand opening of the restored left front parlor.  Mr. T. R. Fehrenbach, Commissioner of the Texas Historical Commission, presented the Texas Award for Historic Preservation to the Society for the Preservation of Historic Fort Sam Houston and Fort Sam Houston for their exemplary stewardship in the renovation of the Stilwell House.

Over the next five years, work on the house continued with sponsors being found for the renovation of all of the remaining rooms.  Sponsorship of a room allowed the room to be named for the sponsor and the placement of family photos and appropriate furnishings in the room.

On 26 June 1998, a ceremony was held for the dedication of the completion of all the rooms on the ground floor.  It was announced that on 1 September of that year, the Stilwell House would be available as a venue for public and official activities.  Under the outgrant agreement, the Society would make the house available at no cost for up to sixty official military functions per year.  For the remainder of the time, it was available for unofficial and public activities such as weddings, meeting and promotion parties in support of fund raising activities.  Since that date, all of the rooms have been restored and the exterior of the building was painted to match the original color of the brickwork.

In the process of taking the Stilwell House from a near derelict state and not only preserving it but also putting it back into useful service in the community, the Society for the Preservation of Historic Fort Sam Houston broke new ground.  The concept of a public and private partnership in the renovation of historic properties as pioneered by the Society has become a model for preservation organizations nation-wide.